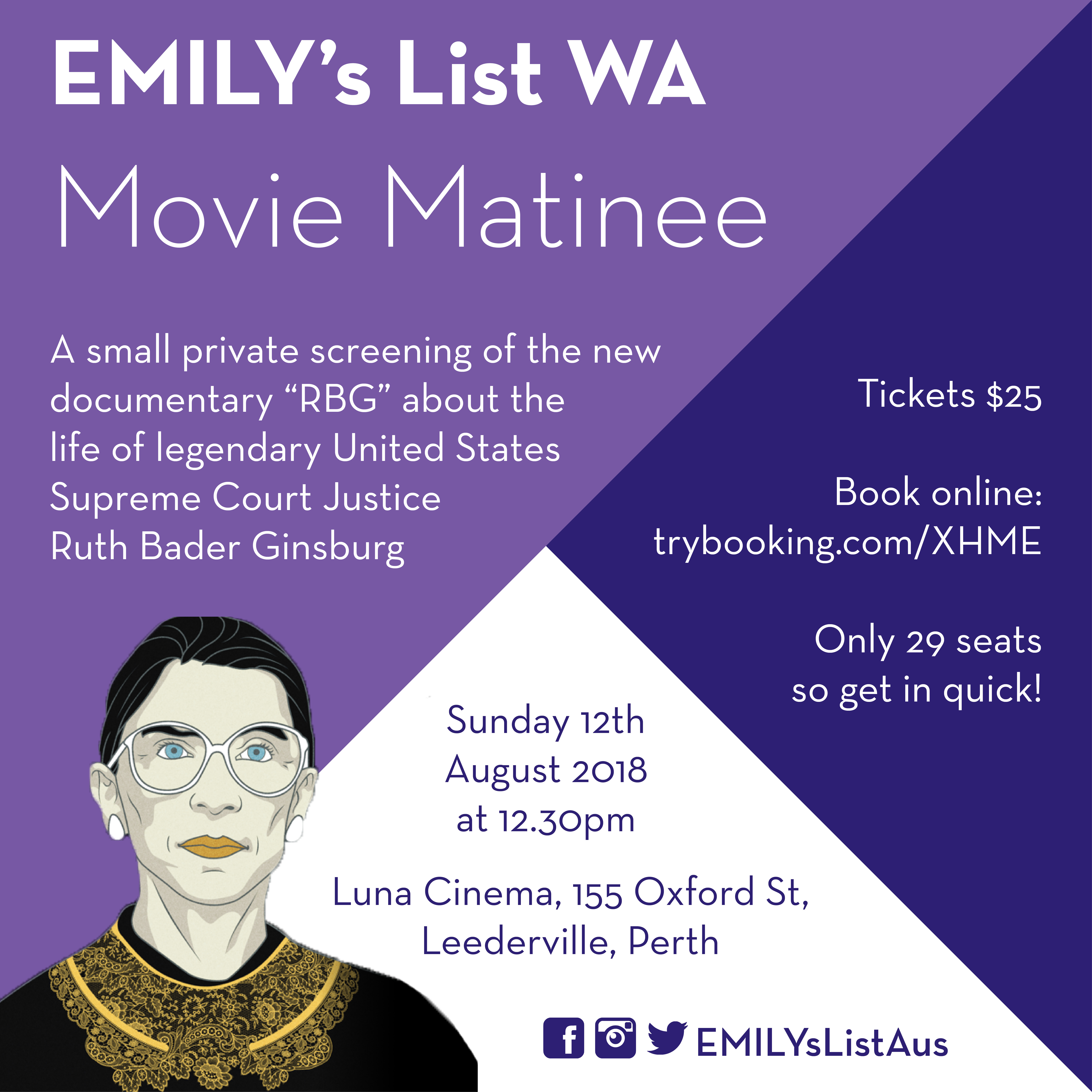 Only 29 seats so get in quick! 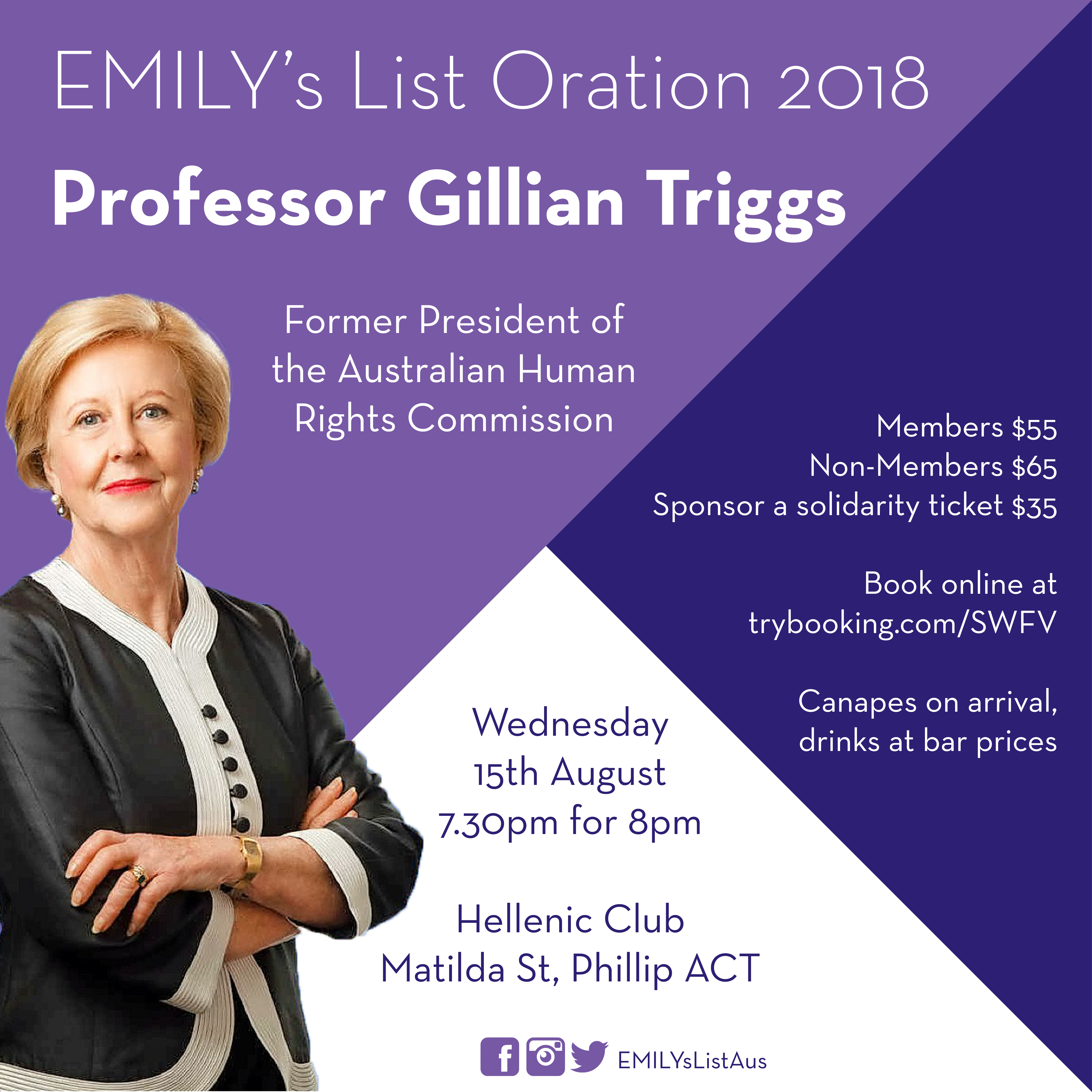 We're honoured to announce our 2018 Oration in Canberra will be presented by Professor Gillian Triggs! Former Human Rights Commissioner and trailblazer who speaks truth to power.
Tickets on sale at www.trybooking.com/SWFV

Don't miss out, get your ticket quick! 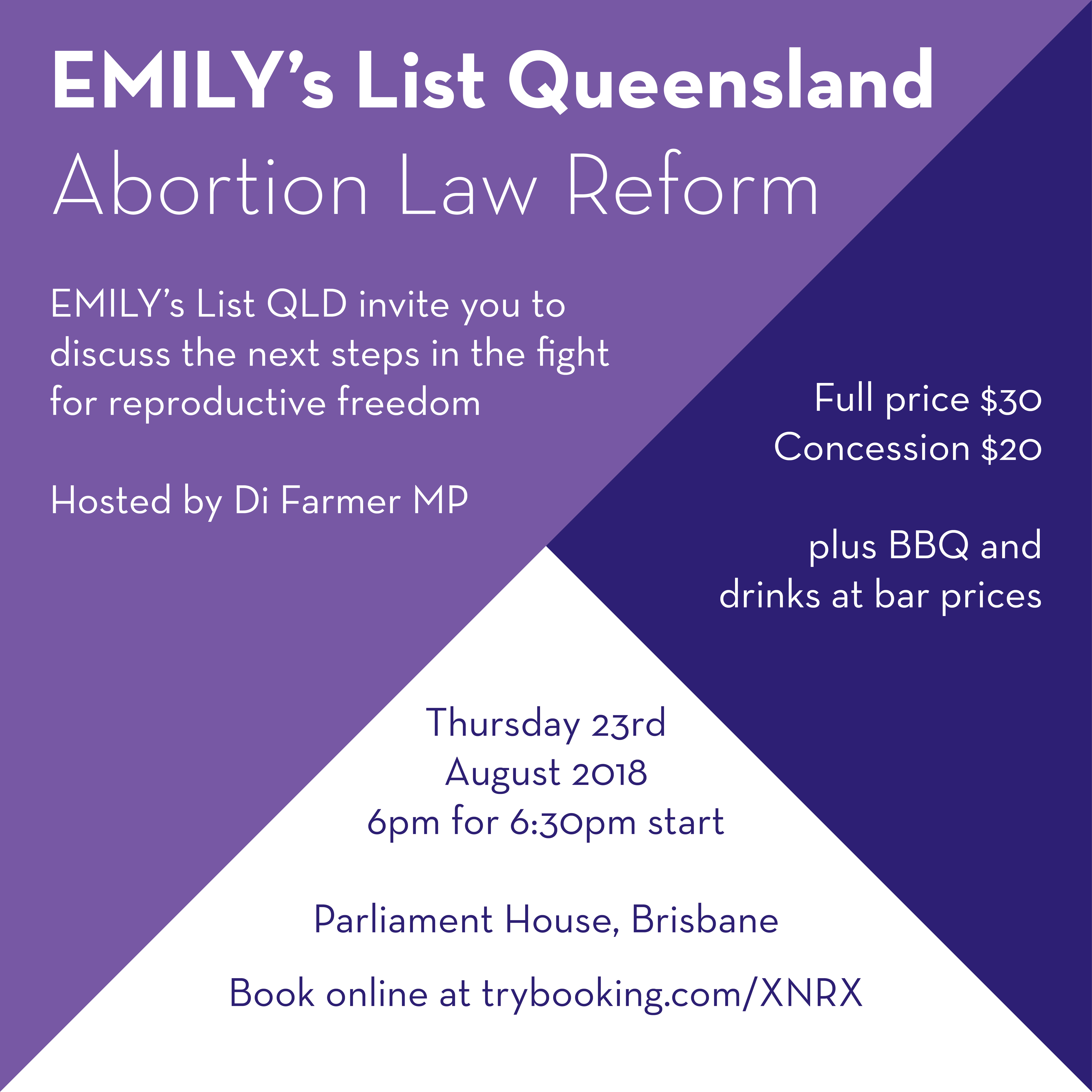 EMILY's List QLD invite you to celebrate the next steps in Abortion Law Reform. Hosted by the Hon Di Farmer MP. We've come a long way but the fight's not over, so together we will make abortion legal in QLD.
Event starts at 5:30pm, formalities commence at 6:30pm. BBQ to follow with drinks at bar prices.
Full price: $30
Concession tickets: $20
Book online: trybooking.com/XNRX 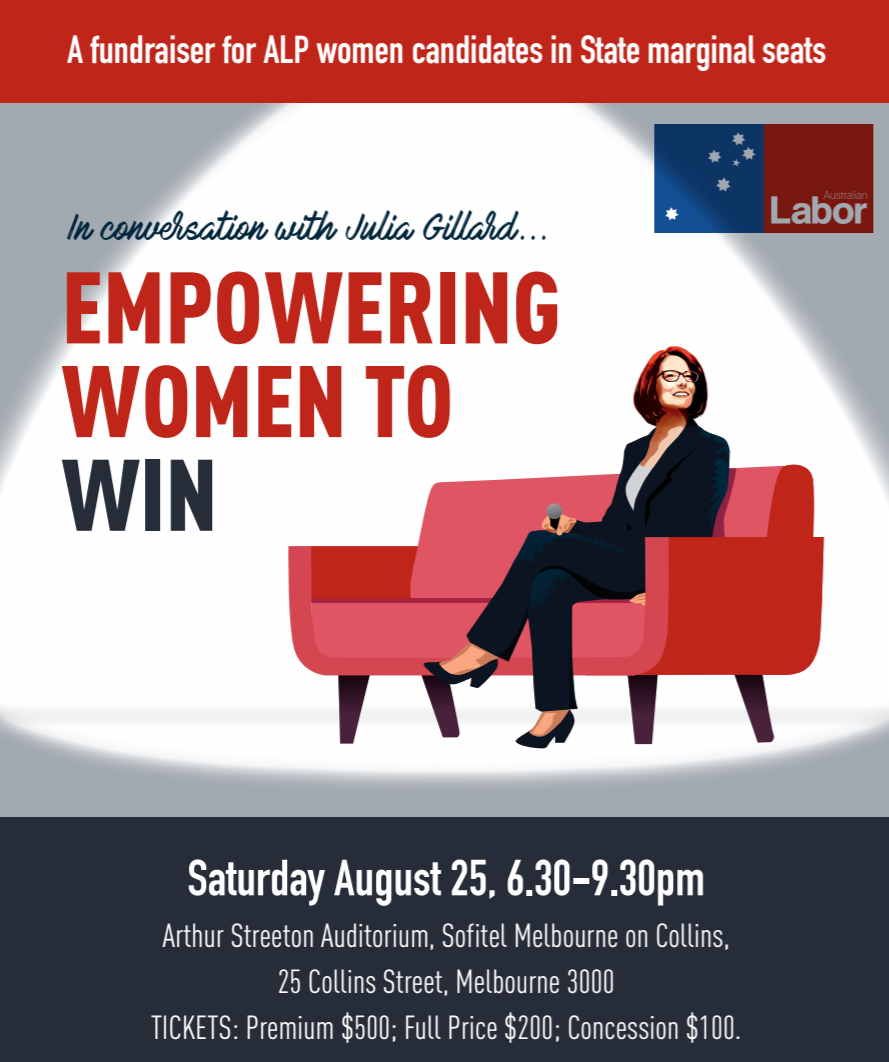 The Hon. Julia Gillard MP will be joined by The Hon. Jenny Macklin MP along with Victorian women ministers & other ‘special guests’ to discuss what it takes for women to get elected in the 21st century. Tickets include drinks & canapés followed by 2 hours of conversation hosted by Australia’s first woman Prime Minister.

All profits will be distributed to women candidates in marginal seats to secure a win in the November State Election. 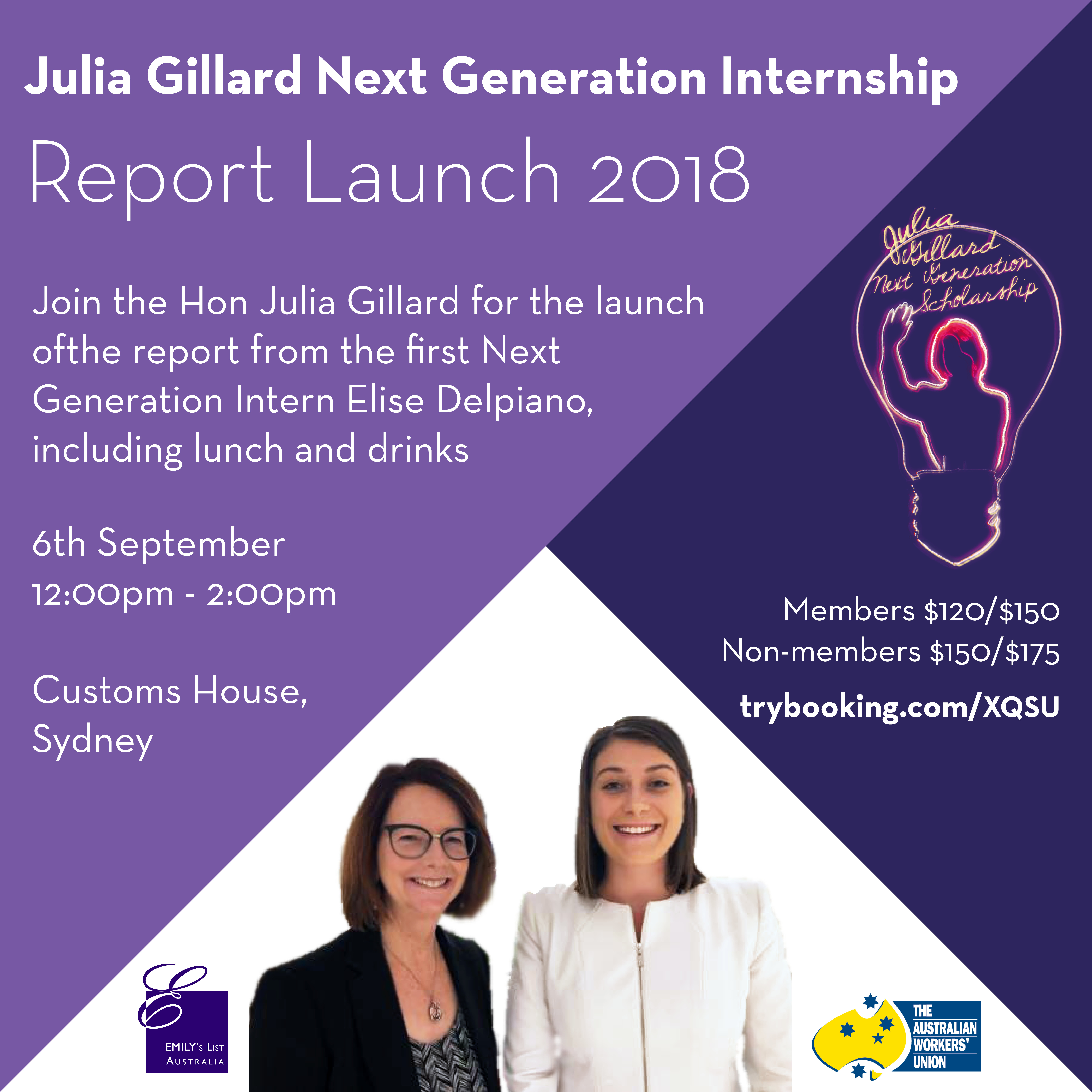 Please join EMILY's List, the Hon. Julia Gillard and Elise Delpiano for the first report from the inaugural Julia Gillard Next Generation Internship. Lunch and drinks to be served. 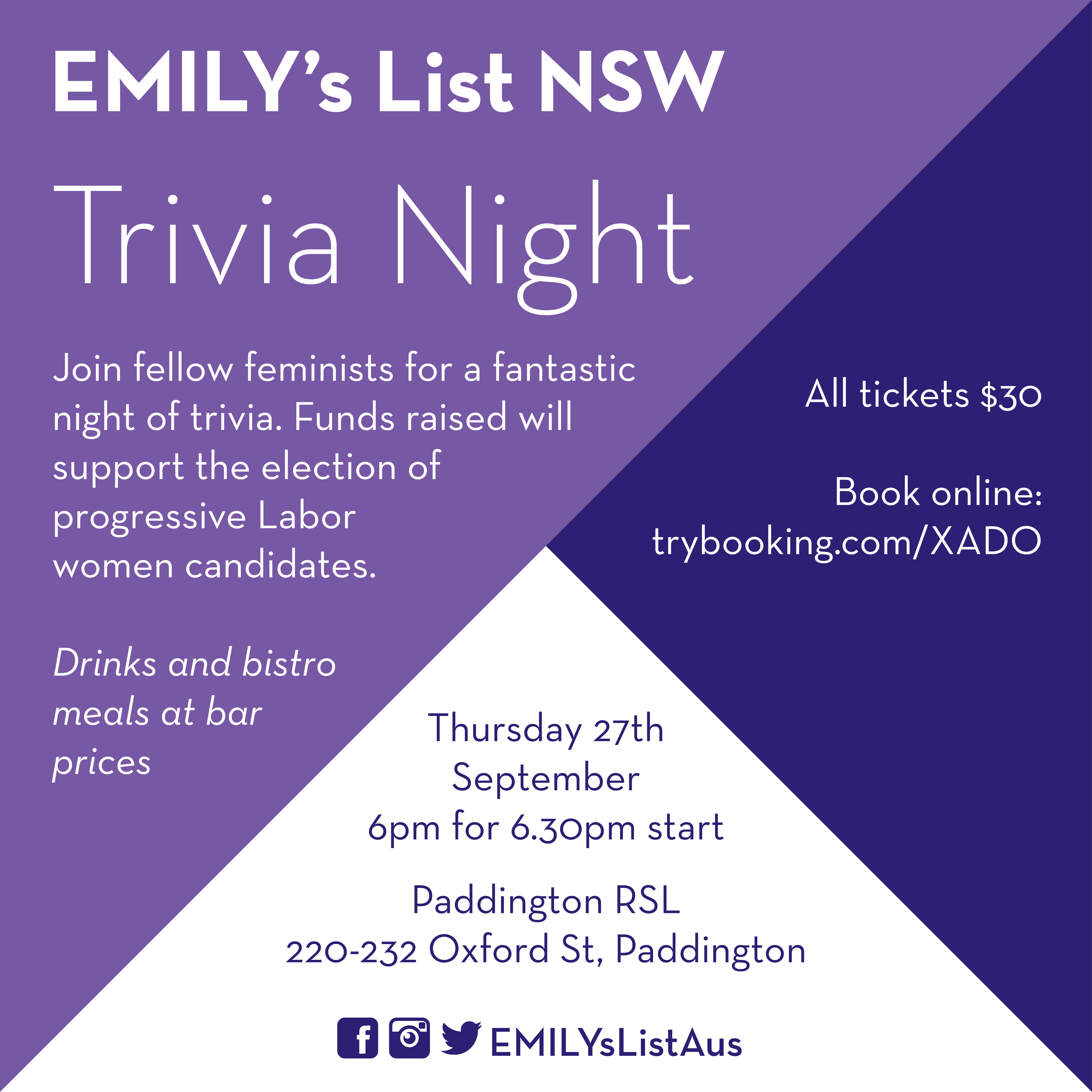 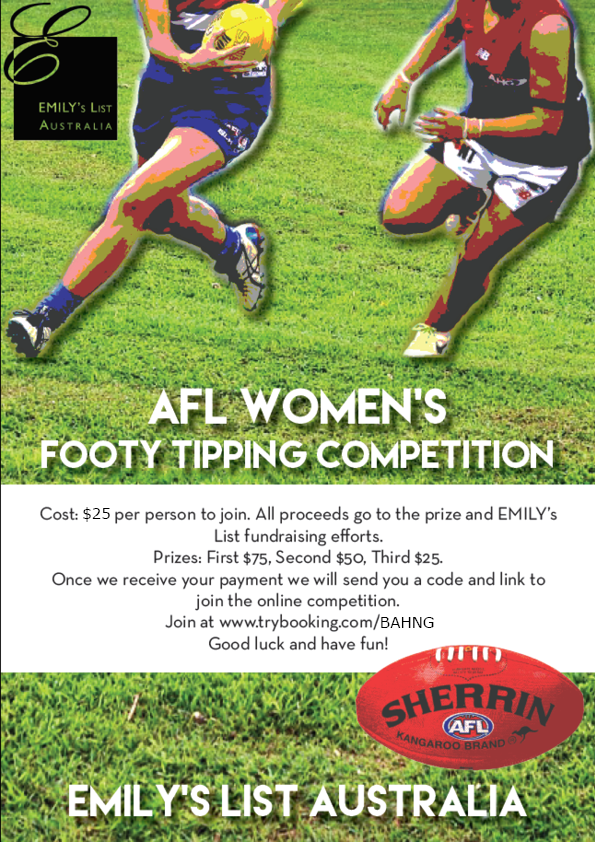 The ACT EMILY's List Action Group (ELAG) invite members and supporters from across the country to be a part of our tipping competition for the AFL Women's 2019 season. Be in it to win bragging rights and prizes of $75 for first place, $50 for second place and $25 for third place.

Entry is $25 per person and you can join over on the TryBooking page, we will then send you a code and link for the online competition. Start studying the preseason form and invite all of your friends! 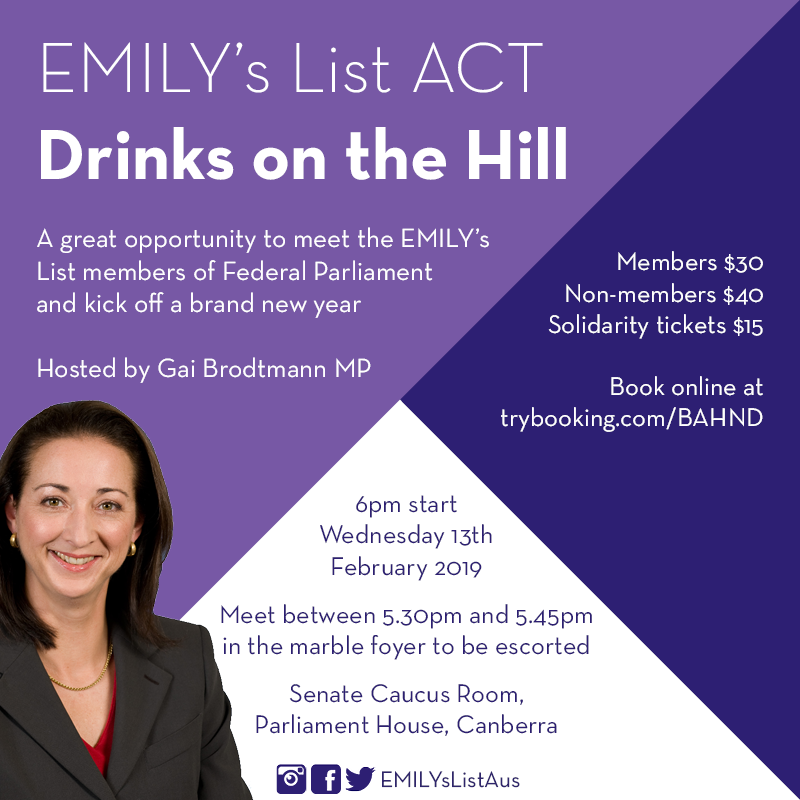 Our first event for the year is great opportunity to meet the EMILY’s List members of Federal Parliament and kick off a brand new year.  The evening will be hosted by Gai Brodtmann MP and we thank her for the ongoing support. 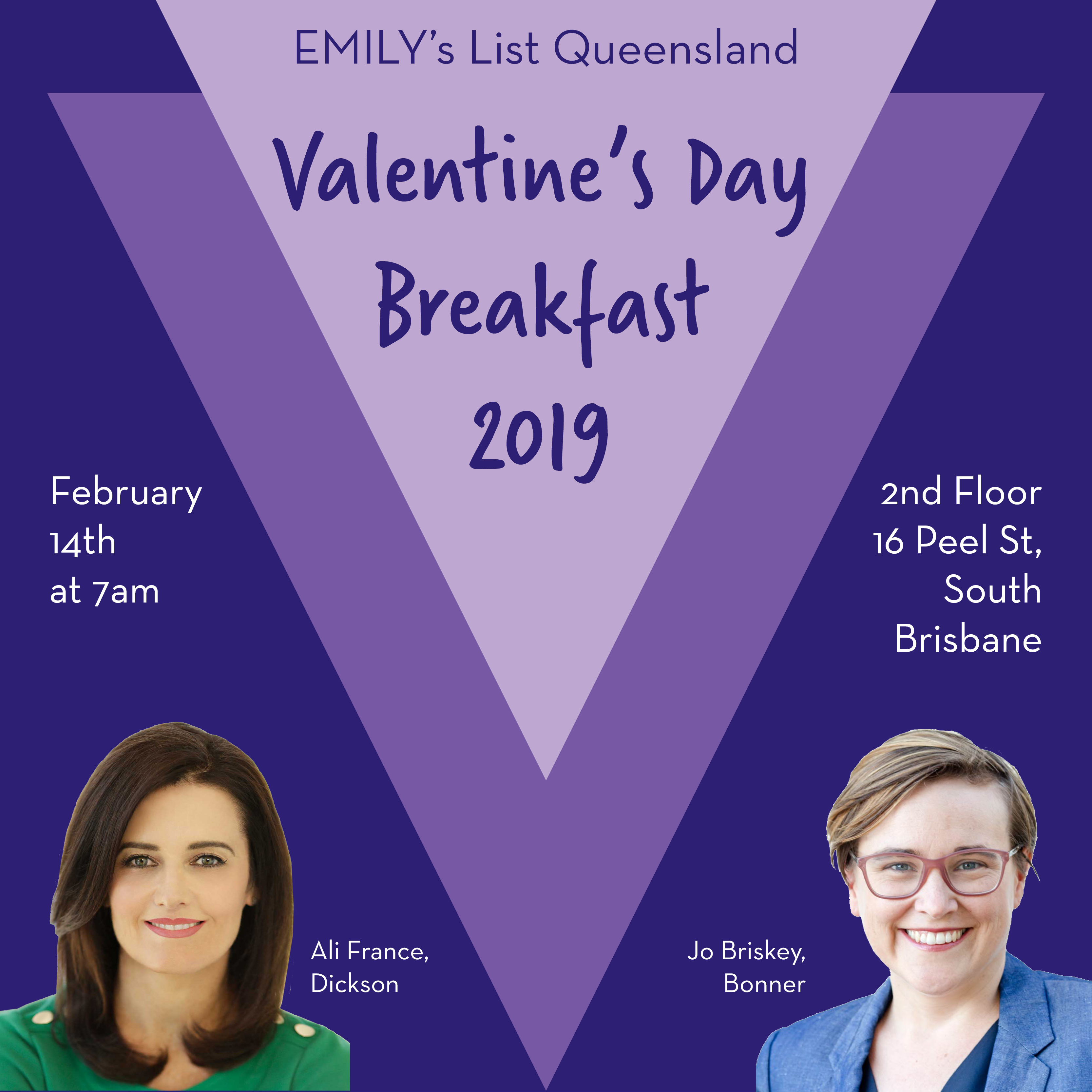 Our annual Valentine's Day Breakfast will be on 14 February 2019 at 7am for a 7:15am start at the Queensland Unions Building, 16 Peel Street, South Brisbane. Tickets are $40 waged / $20 unwaged and can be booked online by clicking here.  In support of Ali France for Dickson and Jo Briskey for Bonner. 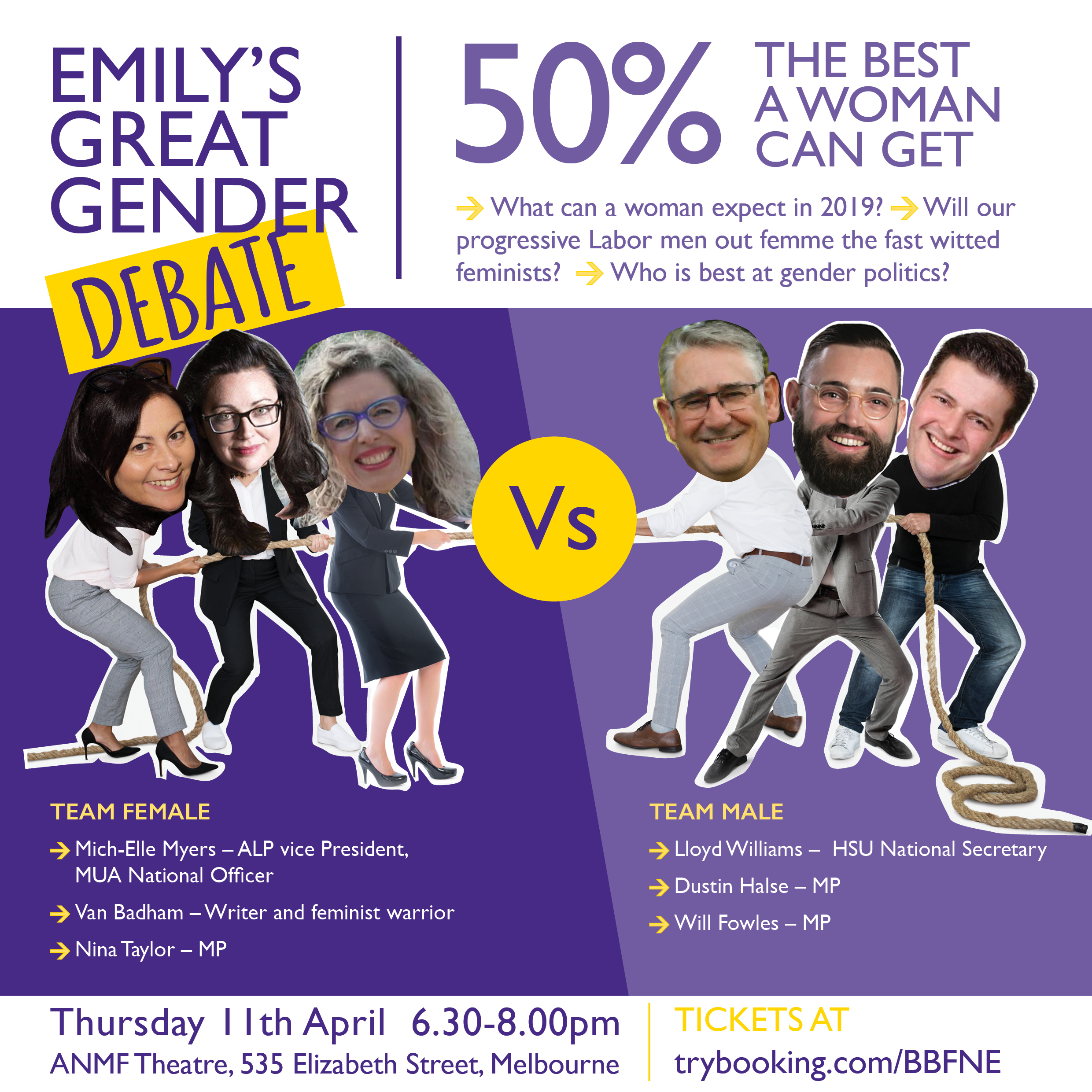 The inaugural EMILY's Great Gender Debate - 50%: the best a woman can get

Watch our women and allies go head to head in a battle of wit and oratory prowess. Will Labor’s progressive men be able to out-femme our feminists? Grab a ticket to find out! 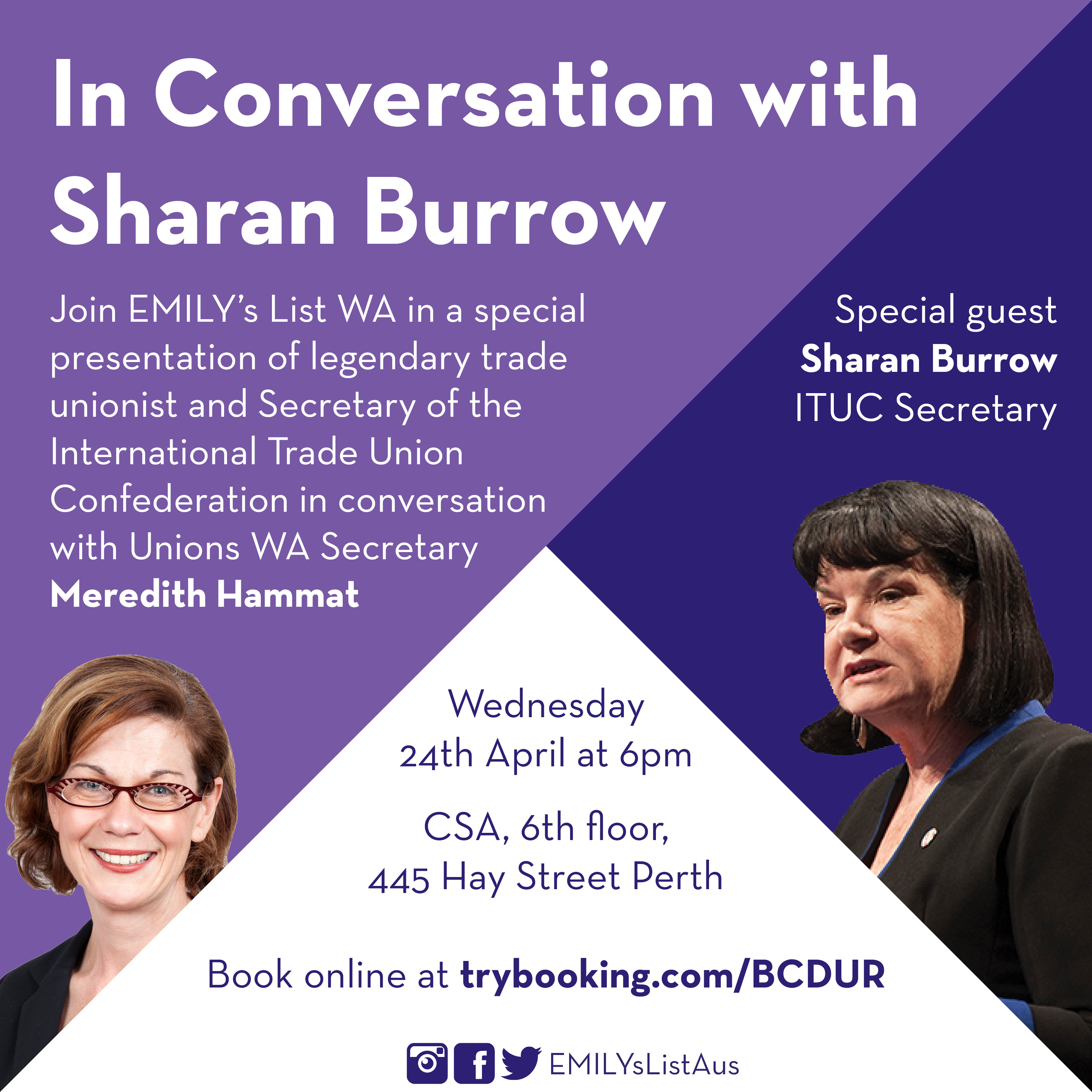 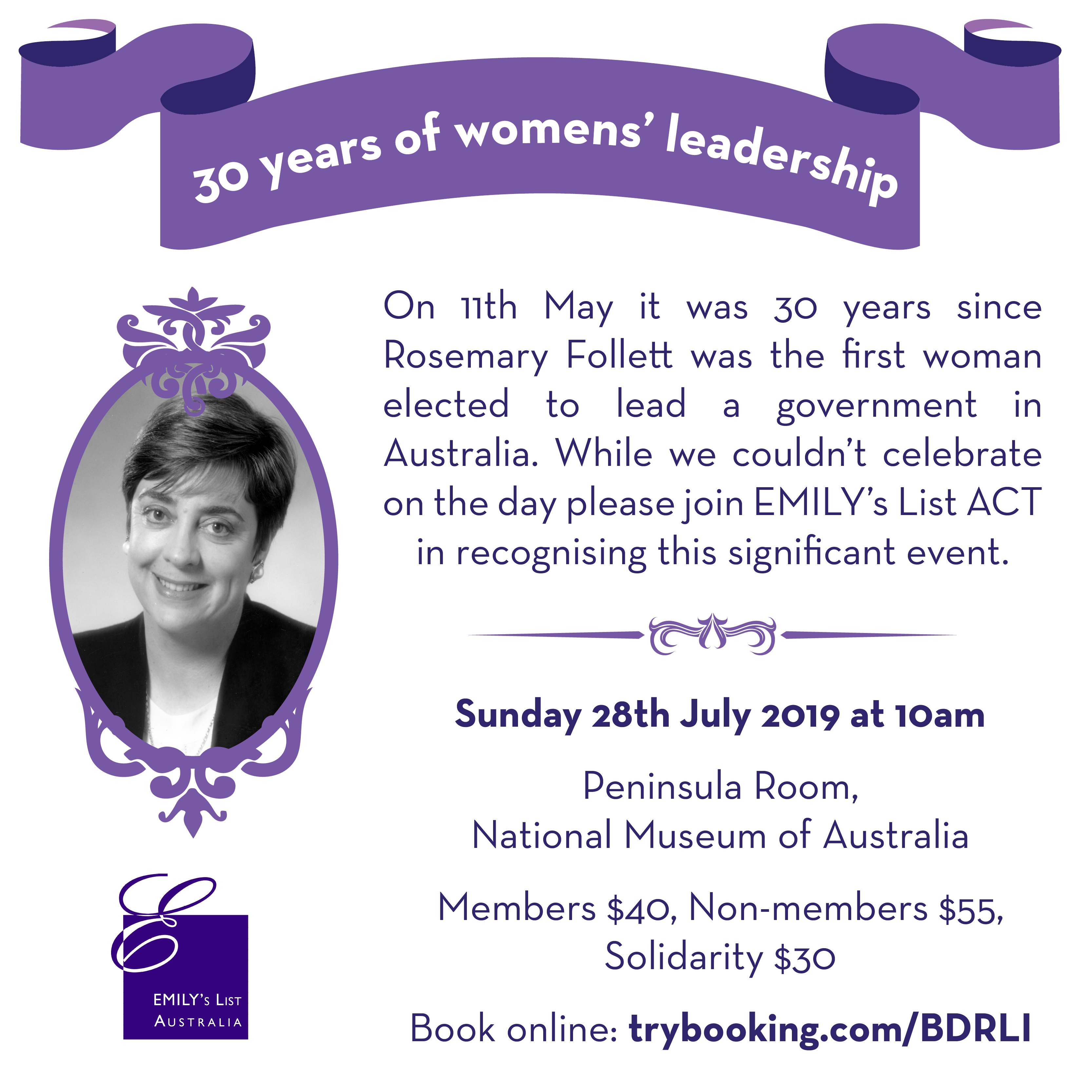 On 11th May it was 30 years since Rosemary Follett was the first woman elected to lead a government in Australia. While we couldn’t celebrate on the day please join EMILY’s List ACT in recognising this significant event. 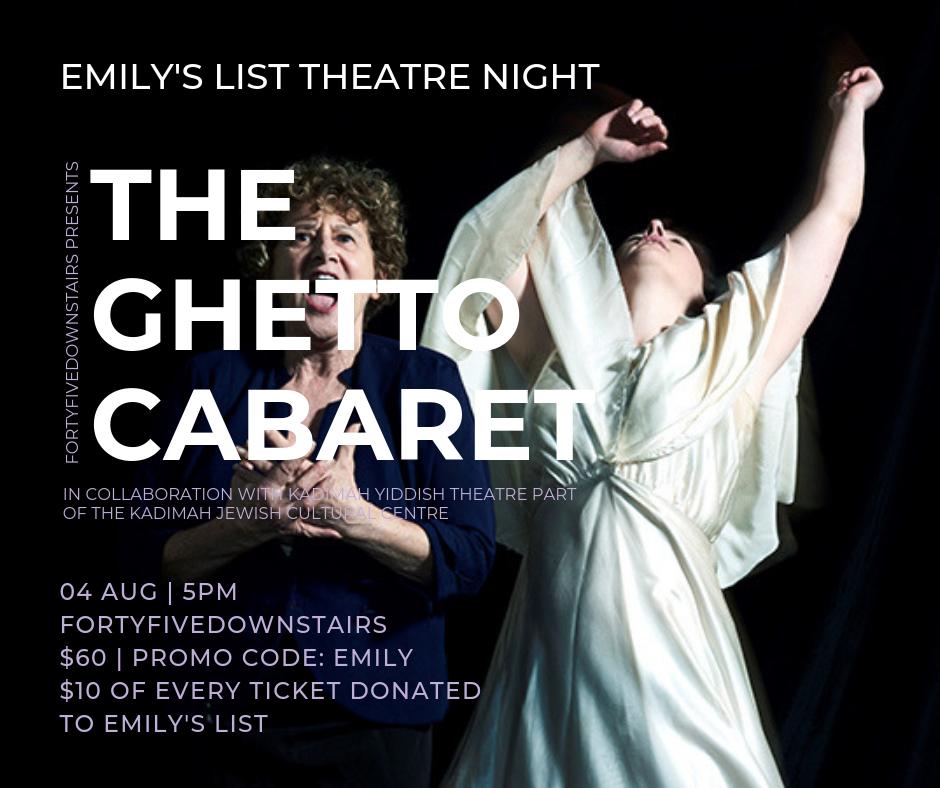 A delightful partnership with fortyfivedownstairs and Kadimah Yiddish Theatre part of The Kadimah Jewish Cultural Centre presents EMILY'S LIST members a special fundraising viewing of The Ghetto Cabaret on Sunday the 4th of August where $10 of every ticket goes directly to support EMILY'S LIST AUSTRALIA with the use of the PROMO CODE: EMILY.

It is sure to be a fabulous night, details as follows:

THE GHETTO CABARET
Any night could be their last performance. Danger, disease and betrayal surround the Jewish musicians, singers, dancers, acrobats, opera and theatre performers thrown together and trapped in the Ghettos of WWII. But their fear is transformed into art as they try to create meaning out of the terror and chaos around them. Full of Yiddish songs unheard for decades, The Ghetto Cabaret is provocative and challenging, revealing the black humour, courage and wit of a people struggling to survive. Audiences are challenged to re-think the widely held narrative of Jews in WWII as helpless victims and instead as spiritual fighters using theatre to inspire resistance, resilience and dignity in the worst of times. Written by Galit Klas and directed by Gary Abrahams, The Ghetto Cabaret tells a daring story created by third generation survivors rewriting the narrative of the Holocaust as a story for everyone.

warnings: not suitable for children under 14 years of age
Contains haze, coarse language and adult themes

please note: while The Ghetto Cabaret features Yiddish songs,
the show has been created for an English speaking audience with many songs featuring an English verse or translation available 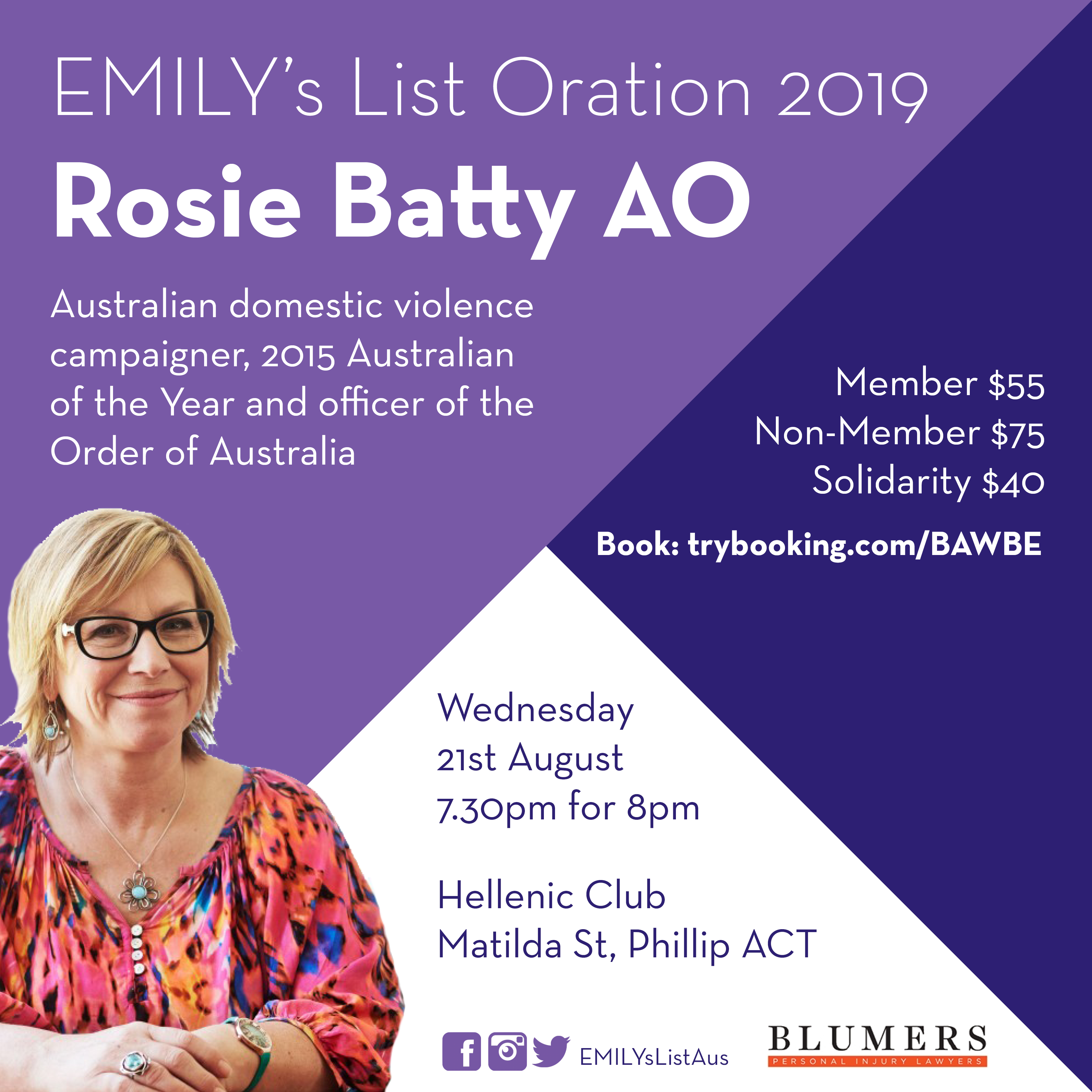 The annual EMILY's List Oration in 2019 will be presented by Rosie Batty AO, family violence campaigner, 2015 Australian of the Year and officer of the Order of Australia. 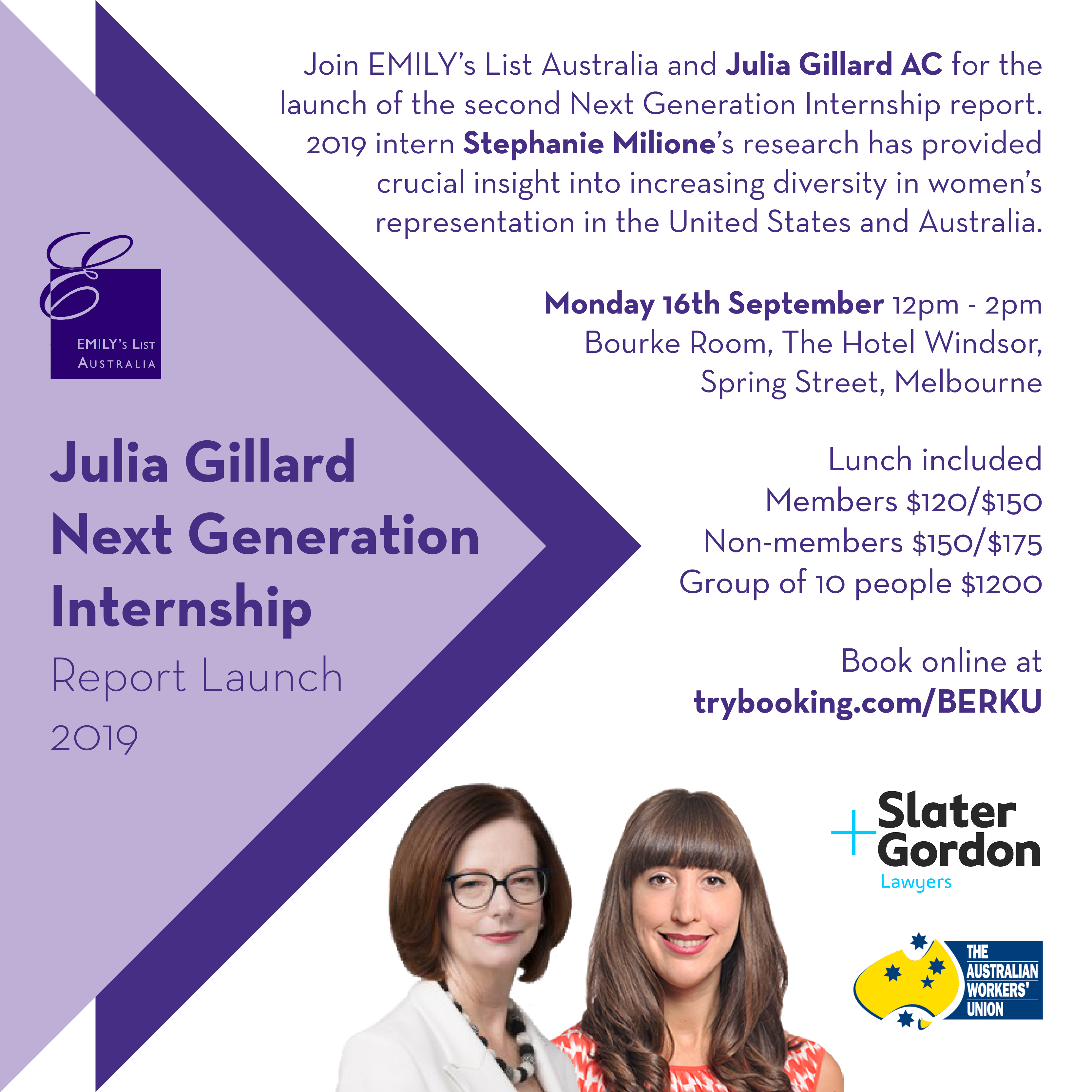 Join EMILY’s List Australia and Julia Gillard AC for the launch of the second Next Generation Internship report. 2019 intern Stephanie Milione’s research has provided crucial insight into increasing diversity in women’s representation in the United States and Australia. 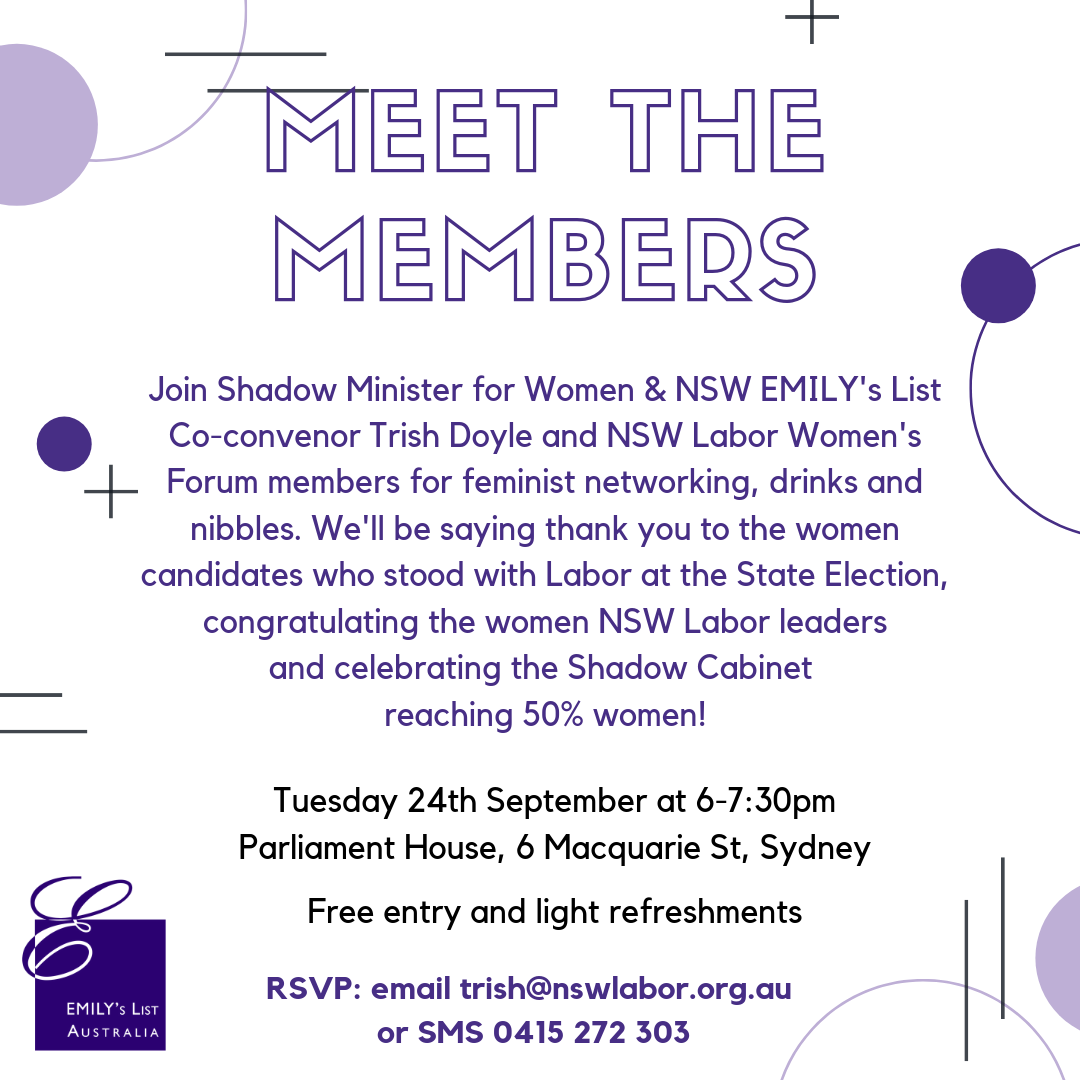 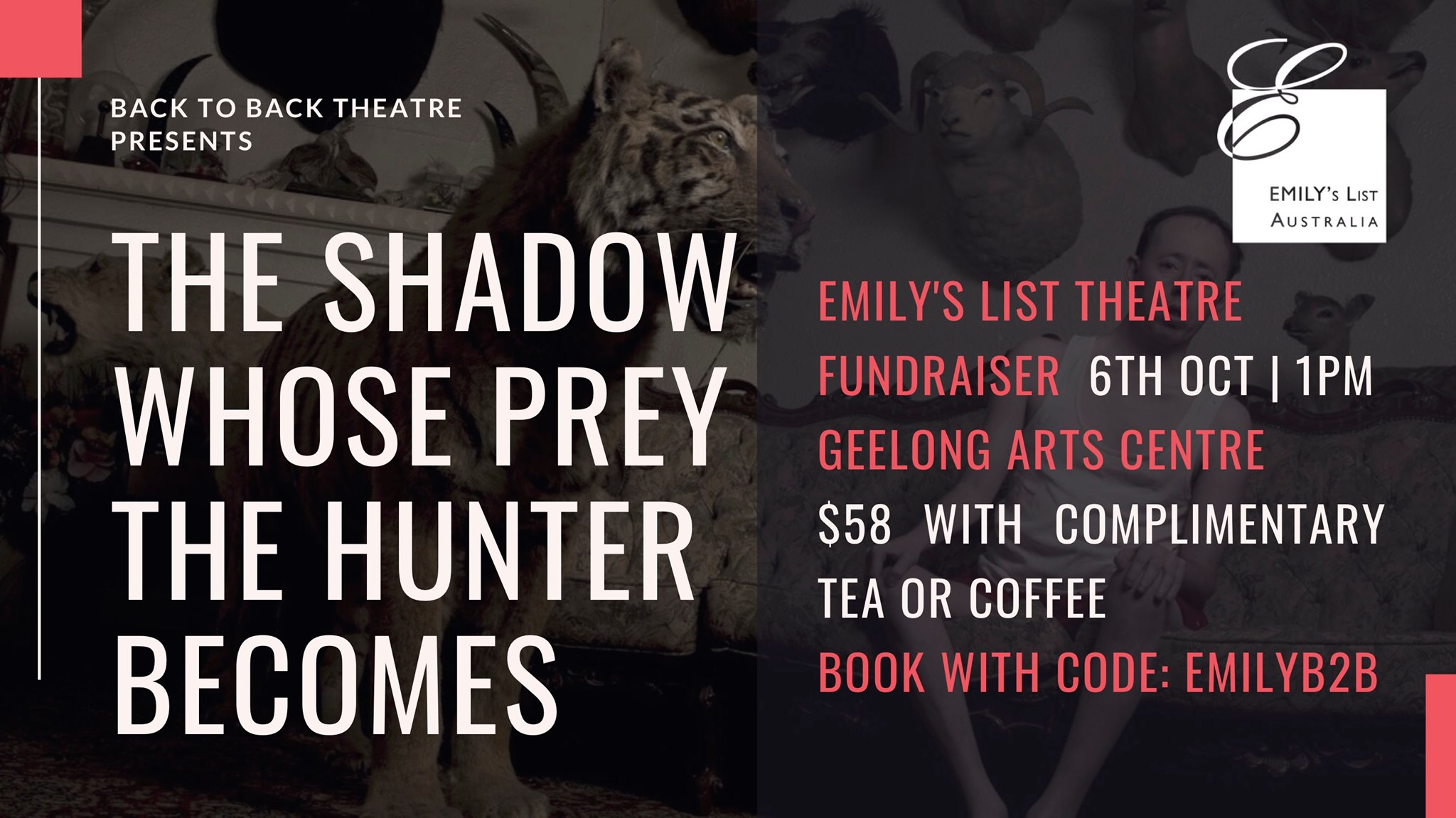 Our not to be missed EMILY's List Theatre fundraiser is back for The Shadow Whose Prey The Hunter Becomes, showing as part of the Melbourne International Arts Festival.

A very warm thanks to Back to Back Theatre and Geelong Arts Centre for making this very special collaboration possible!

---------
The ethics of mass food production, human rights, the social impact of automation and the projected dominance of artificial intelligence are here deftly woven into a compelling narrative that probes the unstable foundations upon which contemporary society is built. A theatrical revelation inspired by mistakes, misreadings, misleadings and misunderstanding, it is an unflinching reminder that none of us are self-sufficient and all of us are responsible. 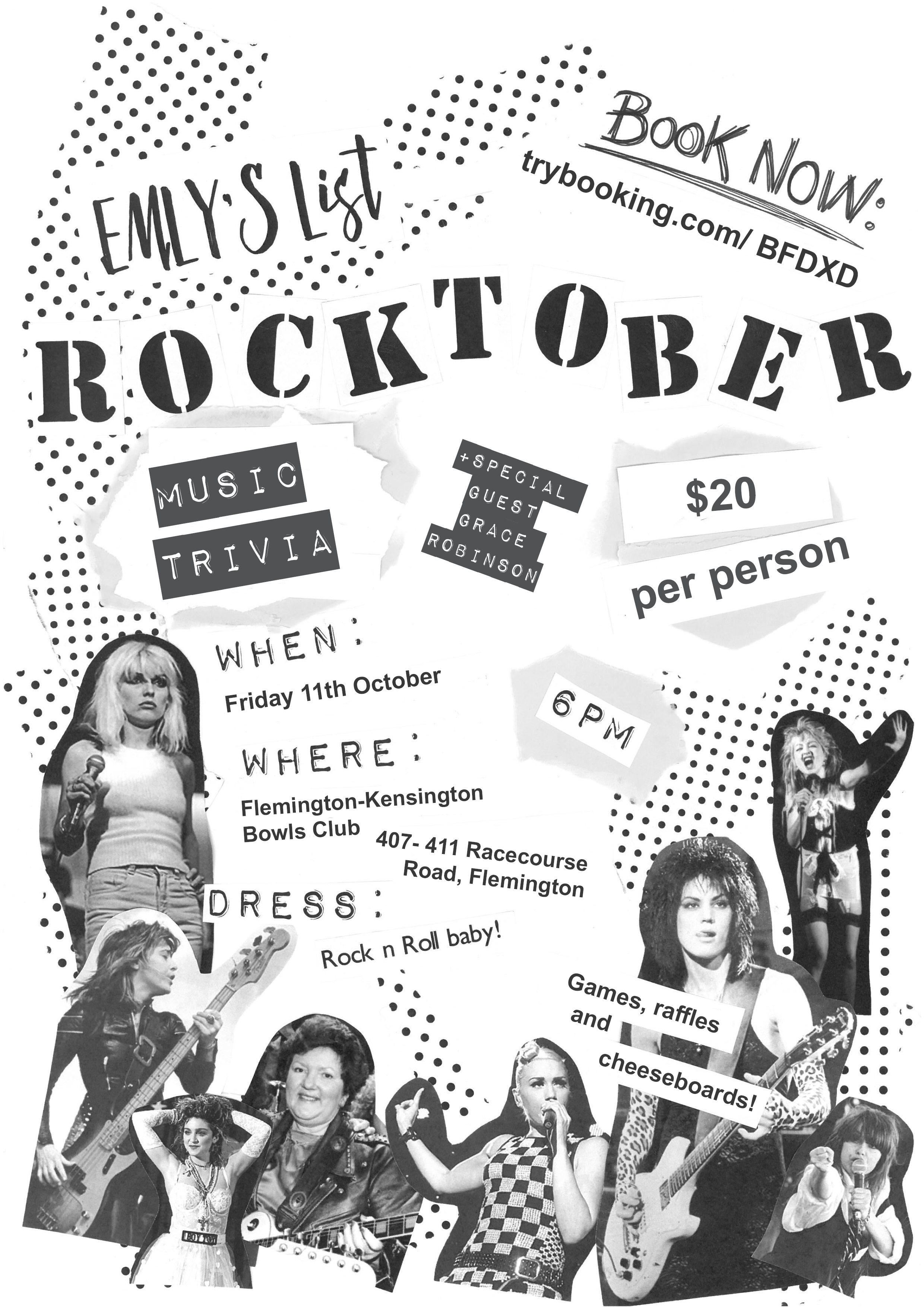 It's back... join us for our Rocktober music trivia night! Get your girl gang together, dress to impress in your finest Rock 'n' Roll attire, bring money it's time to get quizzical! We'll have $25 cheeseboards you can pre-order on trybooking, games, silent auctions, raffles, and more! Special guest Grace Robinson.
- Date: Friday 11th October 2019
- Location: Flemington-Kensington Bowls Club, 407-411 Racecourse Rd, Flemington
- Directions: by tram take Route 57 and get off at Stop 26 (Newmarket Plaza/Racecourse Road, Kensington), by train take the Craigieburn line and get off at Newmarket or Railway station.
- Tickets: $20 entry per person, cheeseboards can be pre-ordered on trybooking also
- Book online: trybooking.com/BFDXD 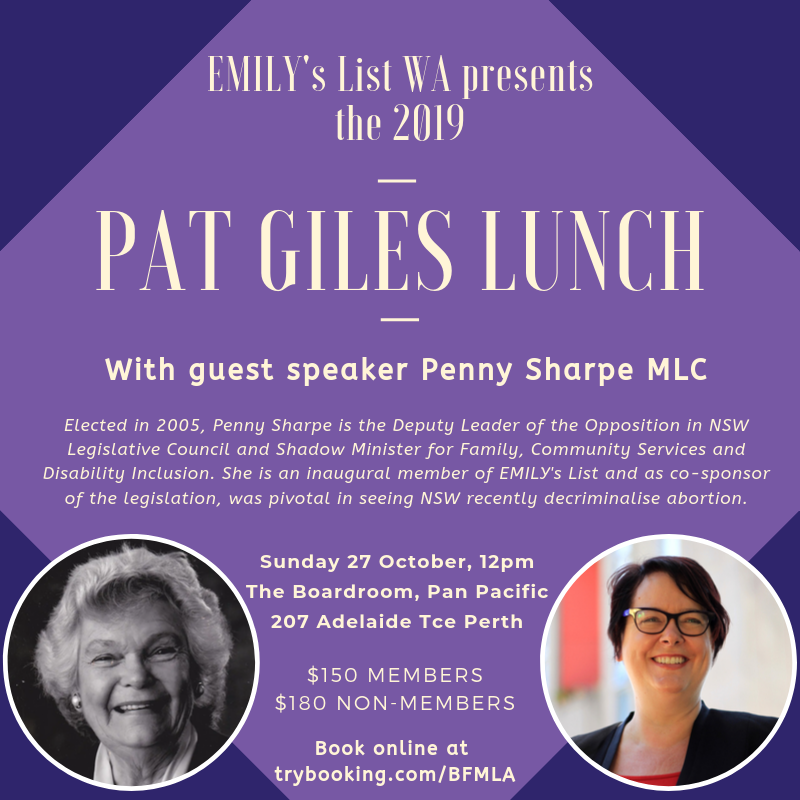 The WA EMILY's List Action Group invites you to the annual Pat Giles Lunch.  A highlight of the feminist events calendar, this year our special guest speaker will be Penny Sharpe MLC, NSW Deputy Leader of the Opposition in the Legislative Council, Shadow Minister for Family and Community Services, and Shadow Minister for Disability Inclusion. 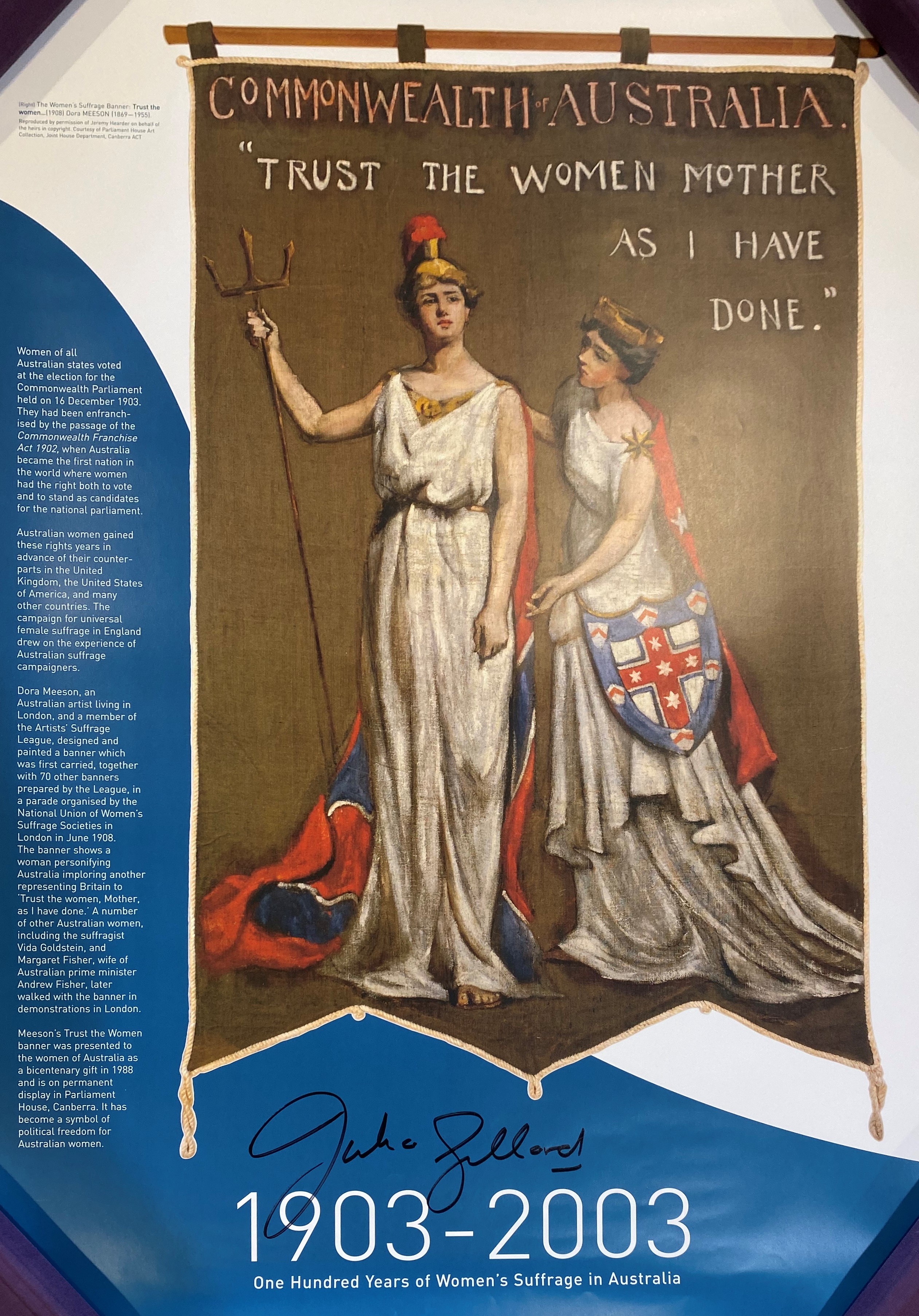 Soon it'll be the 125th Anniversary of Women's Suffrage. South Australia became the first place in the country to allow women to vote and stand as MPs in 1894. It took years of campaigning, letter writing, signature gathering and lobbying and set the precedent for other states/territories to do the same. Let's celebrate this milestone with an online auction!

N.B. It is important to note, however, that full suffrage including Aboriginal and Torres Strait Islander women was not achieved until 1962 for federal elections and 1967 for all state/territory elections. 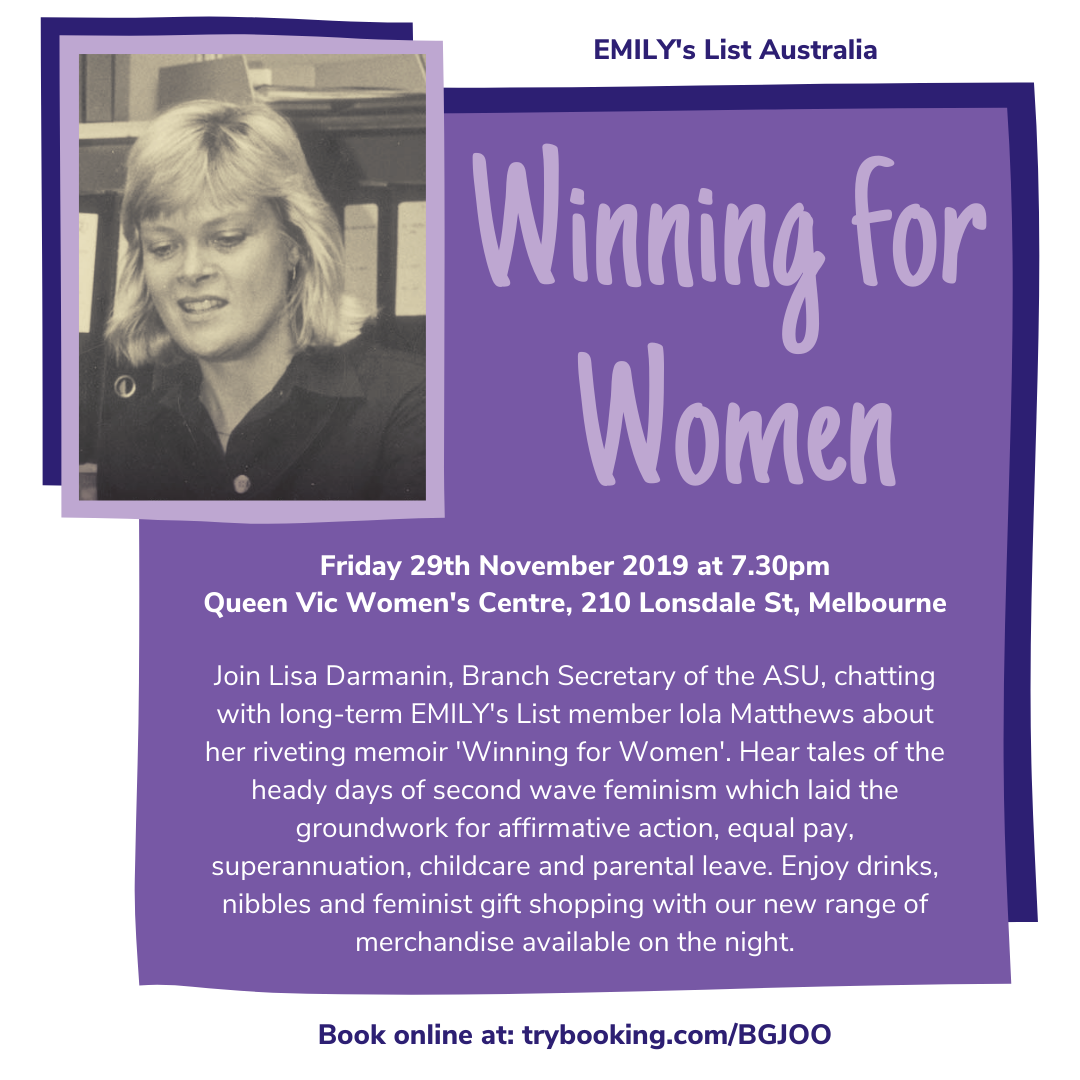 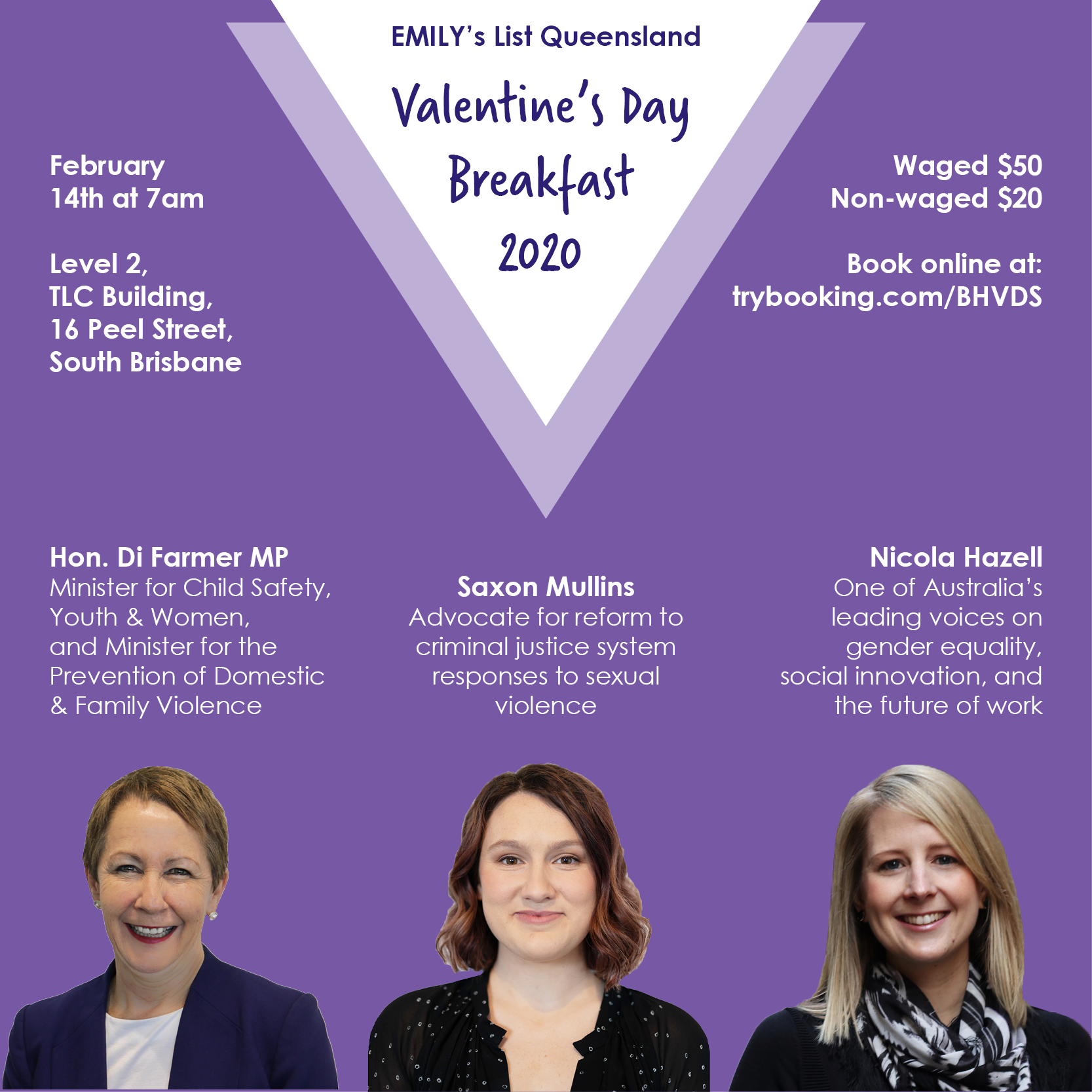 Our first event for the year will be the annual EMILY's List Queensland Valentine's Day Breakfast. The guest speakers this year will be:

With a career spanning technology, politics, journalism, and public affairs, Nicola works with a portfolio of companies – from global tech giants like Twitter to emerging startups and social enterprises – to design and accelerate innovative solutions boosting investment in inclusion, diversity and women’s leadership.

She is a sought-after international advisor and commentator, holding roles on the OECD’s Expert Advisory Committee on Digital Transformation; The Sydney School of Entrepreneurship; CEBIT Australia; Not in My Workplace; and Australian advocacy organisation The Parenthood.

A champion for women in tech and entrepreneurship, Nicola was the founding director and co-designer of the SheStarts accelerator for women-led startups, nurturing and backing some of Australia’s most impressive startup founders to launch high-growth, high-impact tech companies. Nicola executive produced the award-winning SheStarts documentary web-series, which amplified the real and raw stories of women founders to audiences around the world, driving a new narrative for women in tech.

Nicola is a firm believer in collective impact and the power of ‘giving back’, acting as a mentor, judge, advisor and activator for a range of programs including Telstra Business Women's Awards, Women’s Agenda Leadership Awards, Walkley Awards, GoodPitch Australia and SheEO Australia. 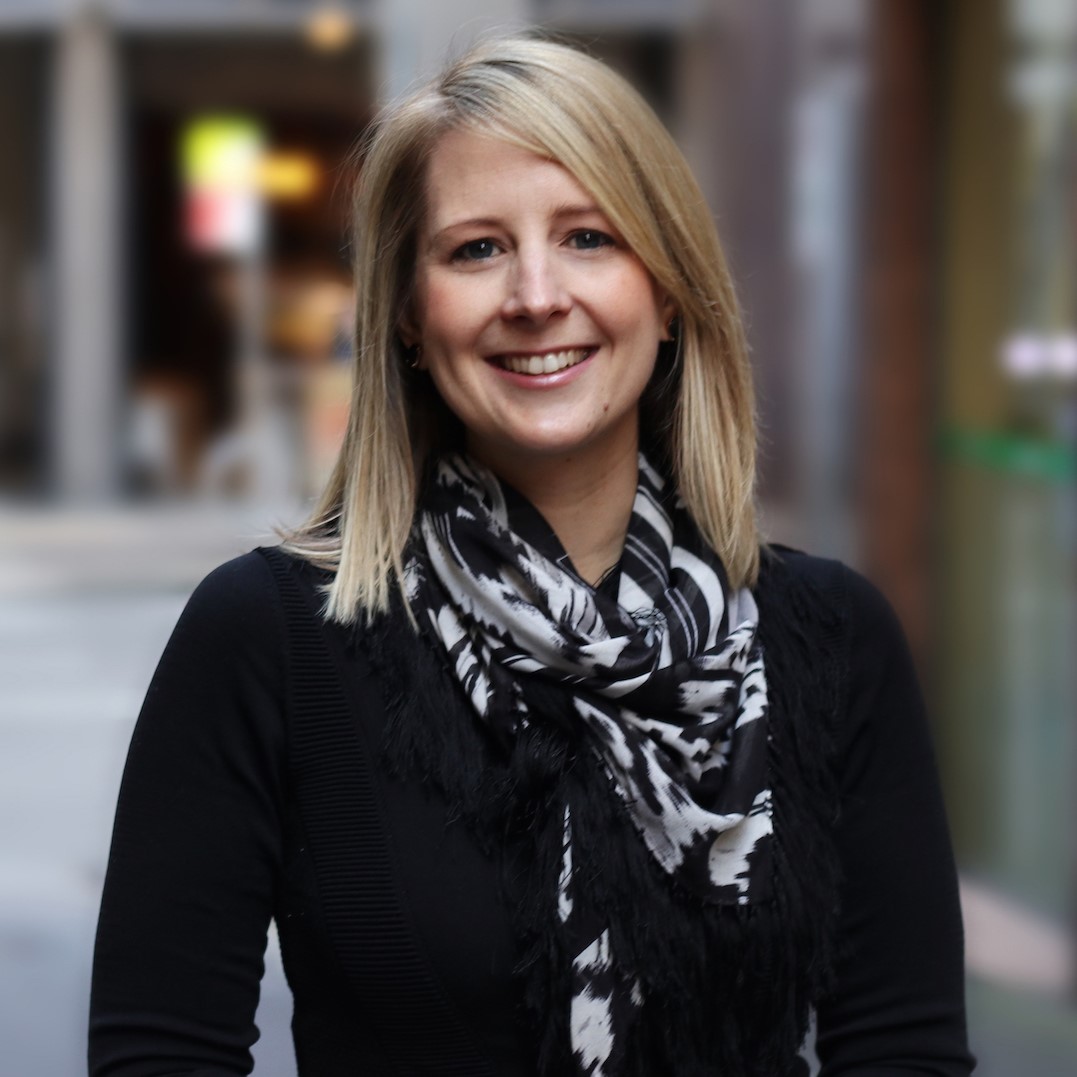 In 2018 Saxon appeared on Four Corner’s episode ‘I am that girl’ where she gave up her anonymity to tell the story of her 2013 sexual assault and the subsequent criminal trials and appeals. The Four Corner’s episode led to the NSW Attorney-General asking the NSW Law Reform Commission to review the section of the NSW Crimes Act that deals with consent in relation to sexual assault. Saxon was the recipient of the Australian Human Rights Commission’s 2018 Young Persons’ Human Rights Medal. She is passionate about igniting a conversation about enthusiastic consent not only in relation to how this is dealt with under the law, but also views about consent within society, particularly from young people. 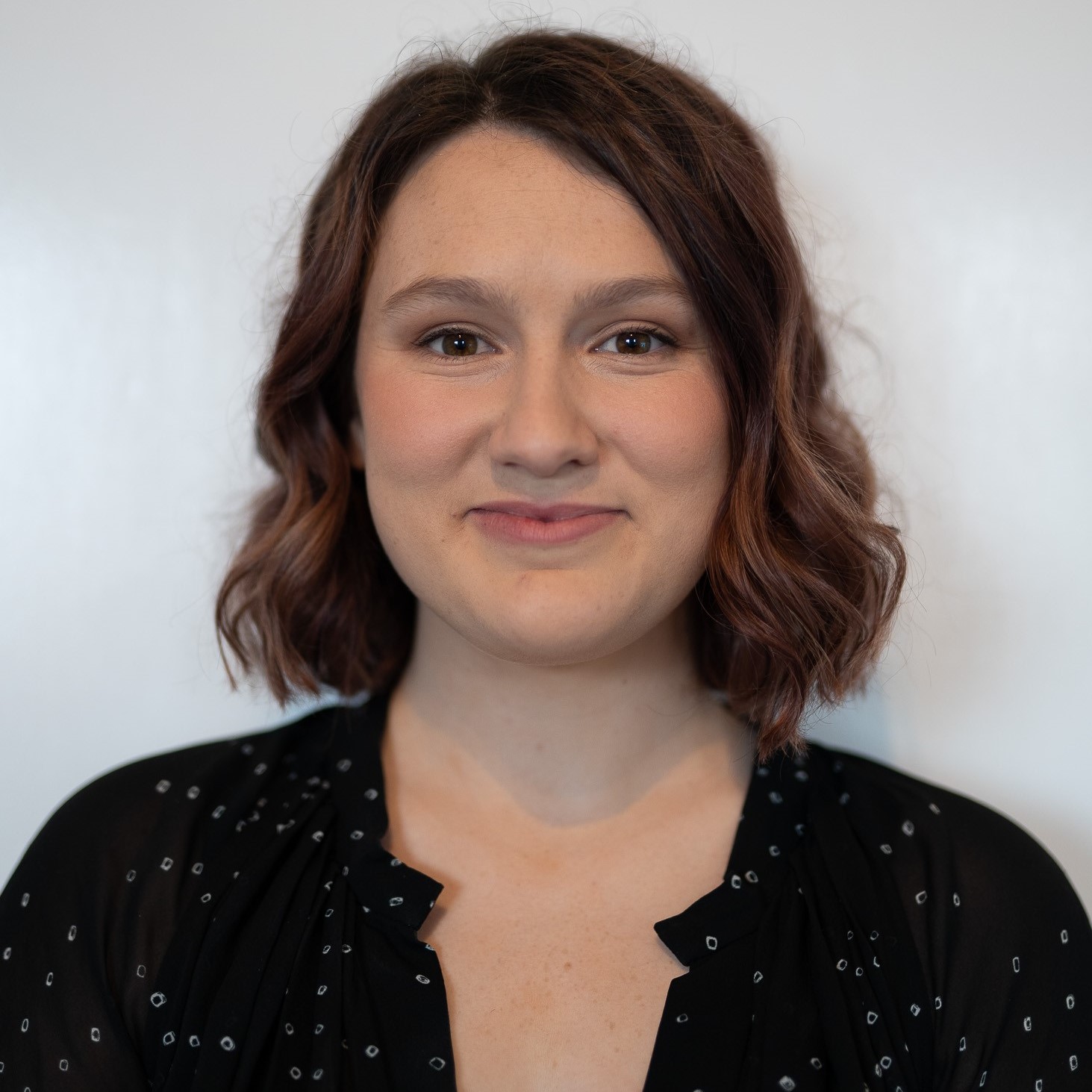 Di and her husband Ian have lived in Hawthorne, in the Bulimba electorate, for almost 20 years. It’s where they have raised their two daughters, Lucy and Millie, and where Di has been actively involved with numerous community groups over many years. Di was honoured to serve as the Member for Bulimba from 2009-2012, earning a reputation as a hard worker who is passionate about her community. She was delighted to be re-elected in January 2015, promising that, under a Palaszczuk Government, she would again be making sure that the voice of her community would be heard. Di has been the Minister for Child Safety, Youth and Women and Minister for the Prevention of Domestic and Family Violence since 2017.

Di holds a range of positions on local community organisations and believes that a politician can’t know what their community needs if they’re not out and about, making themselves as accessible as possible and listening to what’s important to people. It’s why she is so aware of the need for good health and education services. And it’s why she will work with local residents to ensure they have a say in developing a long term local plan that addresses future development, public transport needs and local traffic congestion issues. She knows how important it is to address these issues if we’re to retain the quality of life that’s so precious to residents in her area. 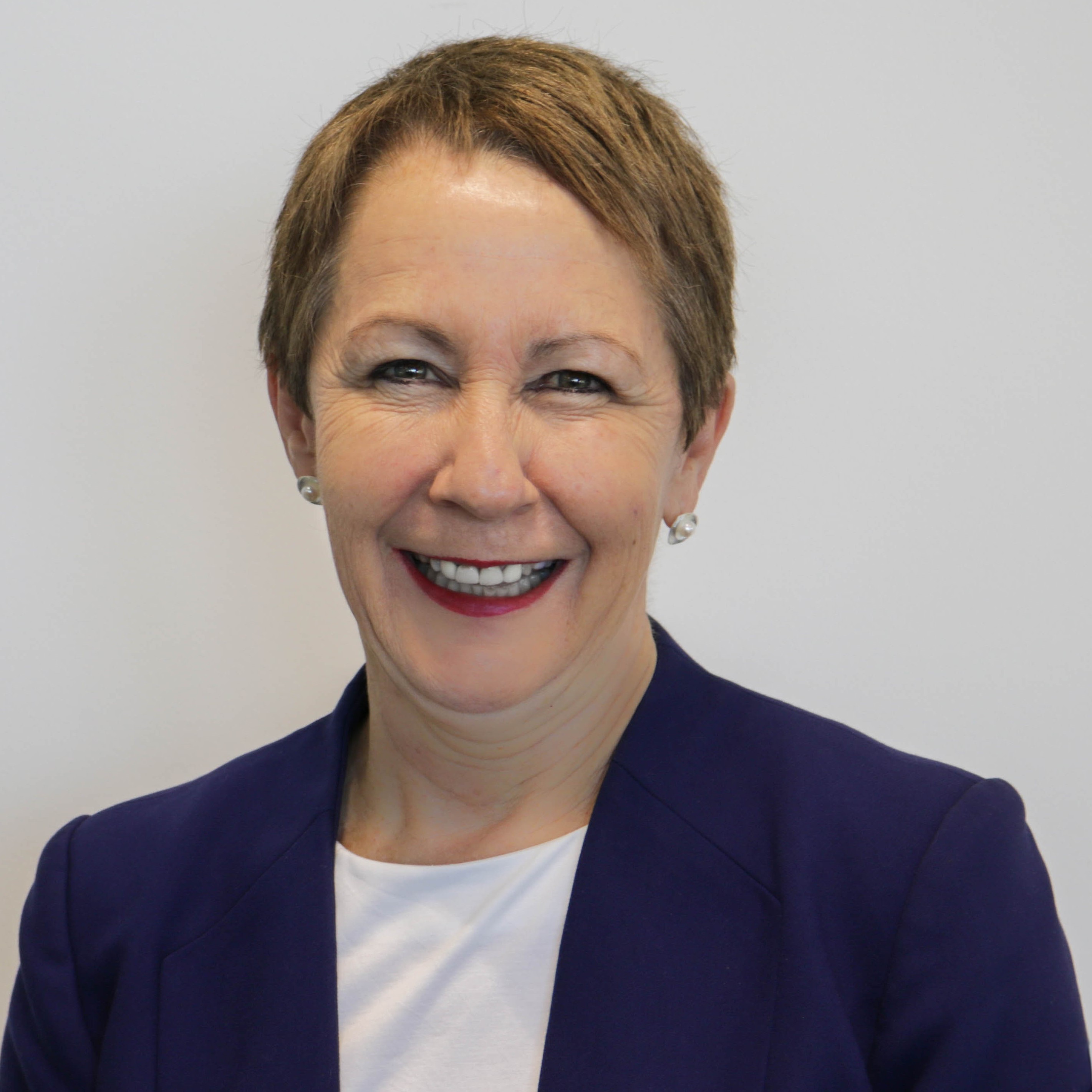 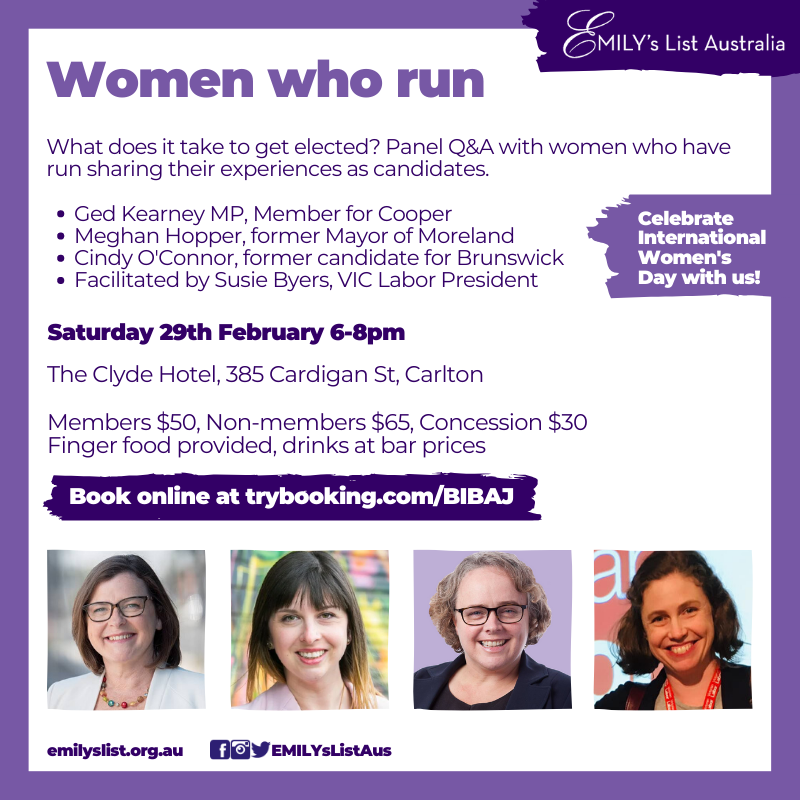 What does it take to get elected? Panel Q&A with women who have run sharing their experiences as candidates. 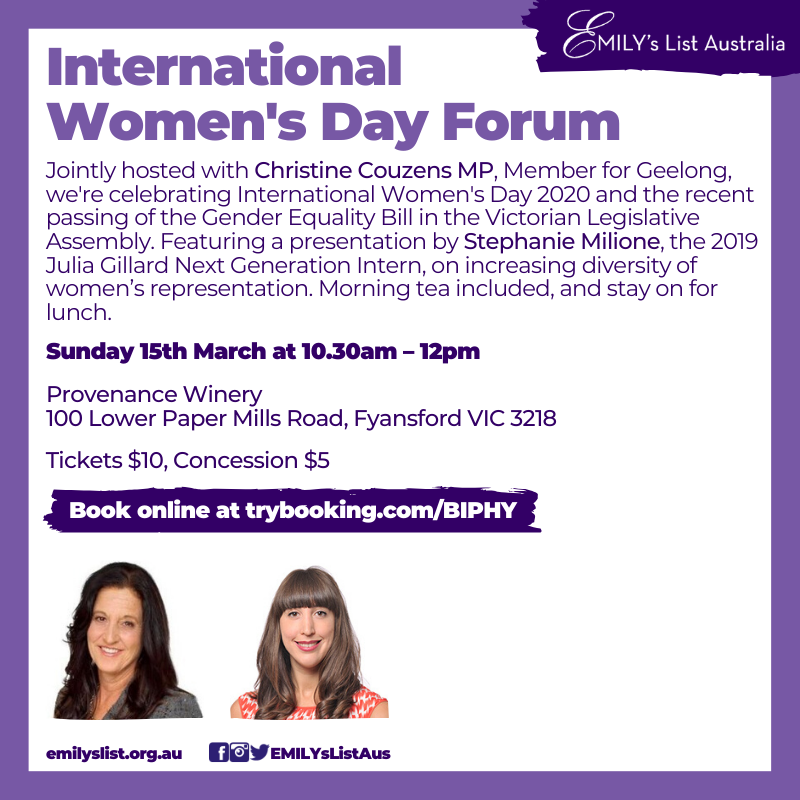 Please join us to hear the journey of Australia's first Gender Equality Legislation recently passed by the Andrews Government, why it is critical for supporting a Safe and Equal Victoria for women and men, and what happens next.

Jointly hosted with Christine Couzens MP, Member for Geelong, the morning will also feature a presentation by Stephanie Milione, the 2019 Julia Gillard Next Generation Intern, on increasing diversity of women’s representation.

Tickets: $10 each, Concession $5. Morning tea included, and stay on for lunch. 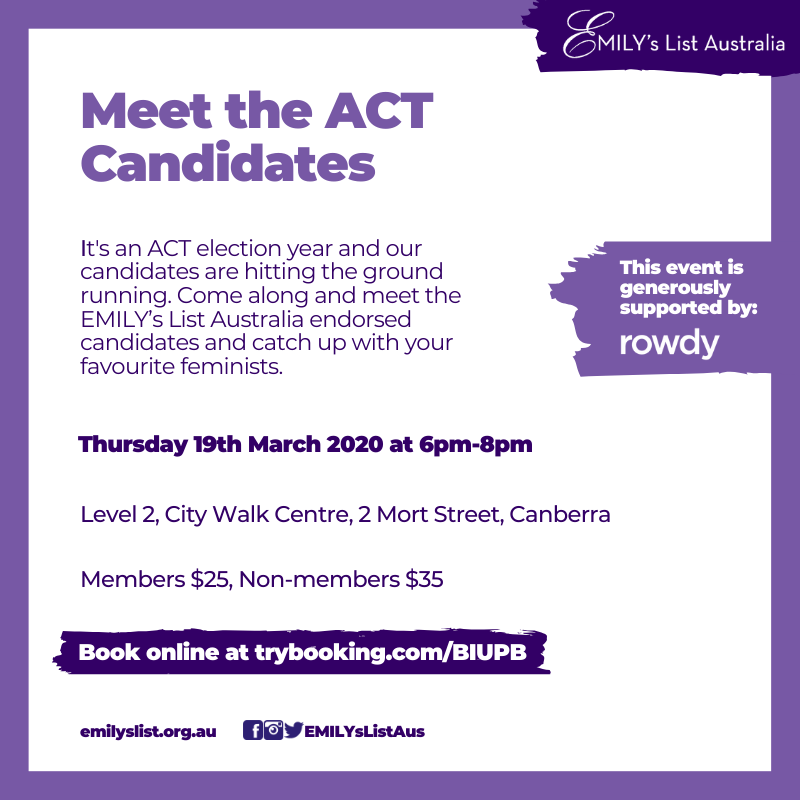 It's an ACT election year and our candidates are hitting the ground running. Come along and meet the EMILY’s List Australia endorsed candidates and catch up with your favourite feminists.

This event is generously supported by Rowdy Inc.