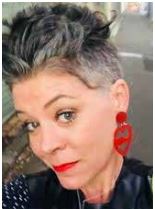 This year’s award recipient is Emily Mayo. Emily is an active member of EMILY’s List and a feminist, unionist, ALP and community organiser and campaigner.

This year, she instigated #ArrestUs, a tipping point action in the successful campaign to decriminalise abortion in NSW. Emily coordinated every aspect of the action including gaining the informed consent and active participation of the more-than-fifty women who came together to duplicate the action of women who took out a newspaper advertisement in the 1970s calling on their own arrests to draw attention to the fact that abortion was criminalised. Emily built a powerful and passionate action and group of women who changed the narrative of the abortion debate in the media, the community and the Parliament. She supported and promoted diverse women to stand up and speak  out about their abortion stories and coordinated all the media contributions.

The #ArrestUs action saw thousands of people add their names and abortion stories on Facebook and by using #ArrestUs on Twitter and Instagram. The Facebook post reached 250,000 within 24 hours, trended across Sydney, Melbourne and Australia on Twitter for two days and collective and individual stories featured in media nationally and internationally. Perhaps most significantly Emily, always looking to build power and capacity in others, deliberately gave the voice of the action to others – younger women, Indigenous women and Women of Colour.