In the early 1990s, it became clear to many women within the ALP and broader labour movement that structural change within the ALP was needed to ensure sufficient opportunities for women to become candidates and MPs. Australian Parliamentary Library research showed that, after almost a century of suffrage in Australia, women's participation in many state and territory parliaments was barely over single figures, with women making up just 14% of the national legislature.

Long-term Labor community and women's campaigner Leonie Morgan AM had seen the work of EMILY's List – an organisation established in the US in 1985 to fund campaigns for pro-choice Democratic women – and advocated strongly for the establishment of a similar network to support Australian progressive women candidates. Leonie joined with women such as Kay Setches, Joan Kirner AC and Candy Broad to build support for the idea in Victoria first and then nationally. This didn't happen overnight – from 1992 to EMILY's launch in 1996. 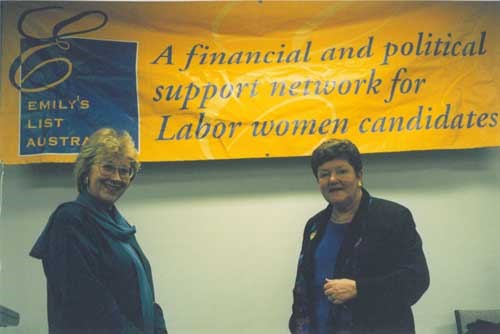 These determined women realised that setting up EMILY's List Australia was not going to increase the number of women in our parliaments without accompanying changes to ALP rules to enshrine affirmative action. After a campaign, which also involved, Carmen Lawrence, Julia Gillard AC, Helen Creed, Jenny Beacham, Judy Spence, Meredith Burgmann, Jan Burnswoods, Carolyn Pickles, Anne Levy AO, Molly Robson, Sue Mackay and Fran Bladel, the ALP passed its first affirmative action rule in 1994. This required women to be preselected in 35% of winnable seats at all elections by 2002.

Despite this landmark achievement, the following Federal Labor pre-selections resulted in the number of women pre-selected in safe and winnable seats declining rather than increasing. Labor women realised that more was needed to be done to bring about cultural change and that EMILY's List was the vehicle to do it.

EMILY’s List Australia was set up as an independent body outside the ALP after the then leadership indicated that the party would need to manage the organisation and distribute the funds it raised. This was unacceptable to the women who valued the feminist and community organising principle that women should control their own finances and their organisations.

A more detailed look at our history

More detail about EMILY’s List’s history can be found in Housebound: a woman’s place is in the House (and in the Senate). This publication was produced to commemorate our 18th birthday in 2014. Contributors include Julia Gillard AC, Joan Kirner AC and many of the key women who played a role in developing EMILY’s List. Please email us if you would like a printed copy.