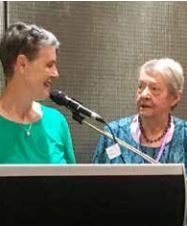 Kay Hallahan AO is the sort of committed Labor member we all want in our area. Having joined the party in 1976, Kay is at many events and forums, mentors many of the women, young and old, we see as leaders in our party, including Alannah MacTiernan.

Kay was the first woman to sit in both houses of the WA Parliament, elected in 1983 as an MLC and 1993 into Legislative Assembly. From 1986 she held Ministerial portfolios including Community Services, the Family, Youth, the Aged and Women’s Interests, Planning, Lands, Heritage and the Arts and Minister for Education. She served as Deputy Opposition Leader from February 1993 until October 1994, in a tumultuous time post WA Inc, retiring from Parliament in 1996.

But her commitment didn’t stop there. In 2004, following the death of Jane Gerick, Kay ran against Don Randall in Canning. While Kay has had an active political representation career she also chaired and was a director at many not for profit organisations including Save the Children Australia and recently the UN WA branch.

Her working career prior to politics included the Police Force in 1969, from which she was forced to resign when she married in 1972 (remember that was less than 50 years ago). She subsequently trained as a Social worker and worked in the community health sector including the Alcohol and Drug Authority.

In 2002, she was made an Officer of the Order of Australia for “service to the community, particularly as an advocate for the needs of children, women and the elderly, in matters of social justice, and to the Parliament of Western Australia.”