Kay Setches takes every opportunity to champion women and being awarded an AM in yesterdays Queen's Birthday Honours List is no exception. 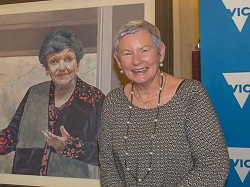 Kay is one of our founding members, a key voice in introduction of the ALP affirmative action rules and will not sit back to wait for incremental change to achieve gender equality in a hundred years time.

Before her parliamentary career Kay worked in retail and women's refuges. As a Victorian MP she created and chaired the Women's Caucus, served as Minister of Conservation, Forests and Lands, and Minister of Community Services and the Minister responsible for Child Care. To pick a few of her achievements, child care places increased from 390 to 15,000; a welfare based child protection system with 24/7 service was created, increased family violence prevention and support funding achieved, supported housing increased from 1,500 to 5,000 and the a maternal and child health after hours phone service was established.

Eight women's health centres, eight sexual assault services and the fore-runner of Women's Health Victoria were established. Kay continued her advocacy for women through work on the Queen Victoria Women's Trust and Neighbourhood Houses Victoria. Her guidance and lobbying helped shape the abortion law reform process in Victoria in 2007-8, and continues with the most recent support of the Voluntary Assisted Dying Legislation.

Most significant to us has been her championing of women's political voices, her contribution to the establishment of EMILY's List and her ongoing mentoring and support of so many current and future MPs.

"Kay is a mover and shaker and when she decides something needs to happen she draws on all her networks and friends to make it happen. Victoria and Australia and its parliaments and our society are the better for Kay's selfless and dedicated service and contributions."  Hutch Hussein