Who is defining merit?

Recent reports that some in the Liberal party are finally considering the introduction of quotas has generated some discussion within EMILY’s List. Helen Creed was involved in negotiating the introduction of Affirmative Action (AA) Rules within both the ACTU and the ALP. She shares some reflections on the implementation.

The changes to ALP Rules are often reduced to the one word description of quotas. The AA changes were much more comprehensive than the pre-selection of women candidates. They were built on over a decade of changes in the administrative side of the Labor Party and in the trade union movement. For example, in 1981 there was a rule change providing that a minimum one third of the delegates to National Conference and National Executive were women.

In 1994, the centenary of women’s suffrage, we confronted head on for the first time that having the right to stand for parliament had by itself not resulted in significant numbers of women winning seats. In September 1994, the National Conference agreed to an AA Rule requiring that by 2002, a minimum of 35% of Labor’s candidates in winnable seats must be women. There were real consequences if the target was not reached, ALL pre-selections to be reopened so that the target would be reached. 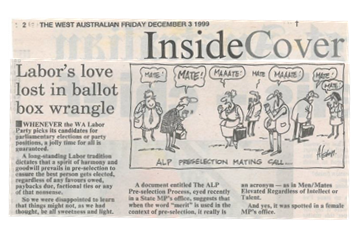 The West Australian, in its Inside Cover of December 3, 1999 made this point very succinctly:

.....when the word merit is used in the context of pre-selection, it really is an acronym – as in Men/Mates Elevated Regardless of Intellect or Talent.

It’s been 25 years since the AA rules were introduced and we still haven’t achieved parity across the board.

While election of so many ALP women into WA's 41st  Parliament is rightfully being acknowledged, only 5 of the 18 Ministers are women and we are still celebrating “firsts” such as Michelle Robert’s as the first female speaker.

It is also no surprise that the majority of ALP women MPs are members of EMILY’s List. EMILY's List raises funds for candidates and provides critical mentoring, networking and other support. It also stands for key principles such as pro-choice, child care, equal pay and equity and diversity.

Do you have a story to share? Please submit a story suggestion for consideration

Originally a social worker, Helen gained a high public profile when she was the WA Secretary of the then Miscellaneous Workers Union during the 1990s and went on to represent working people at both the national and international level. Originally elected to both the Trades and Labor Council of WA and the ACTU in AA positions, Helen was subsequently elected in her own right as Vice-President (Junior, then Senior) and then President of Unions WA and as an ACTU Vice President.  She was a Founding Member of EMILY’s List and with Joan Kirner, the original Co-Convenor of the National Committee.

Helen has also held a number of senior State government positions including as Director of the Office for Women’s Policy, Fair Employment Advocate and Executive Director, Children and Families in the Department for Communities, various roles in the community sector, as well as sitting on a number of Boards and Committees across the community and government sectors.